The firmware update process for both SKR 1.3 and SKR 1.4 is the same so the guides have been combined.

In the menu structure there are a number of items to be selected. 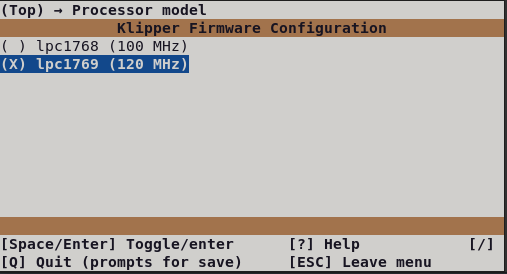 The make command, when completed, creates a firmware file klipper.bin which is stored in the folder /home/pi/klipper/out. This file needs to be copied to both of the SKR boards. The easiest way to do this is to use a GUI like WinSCP on Windows or either Cyberduck or scp (from terminal) on Mac to copy the file to your computer. 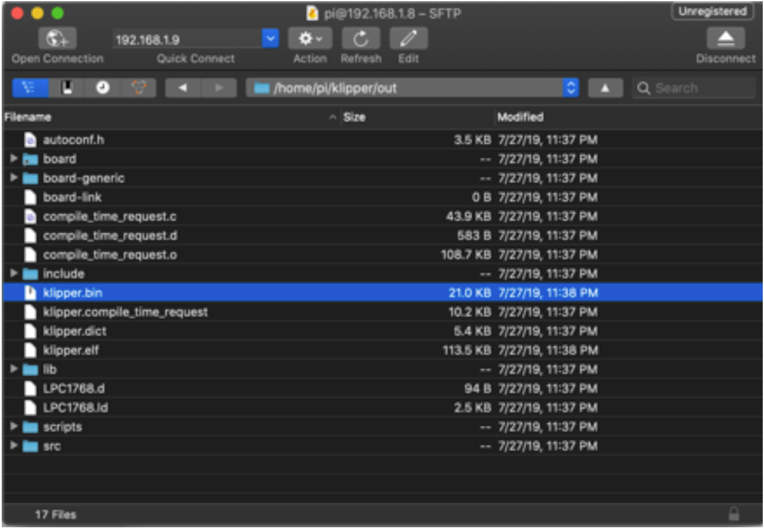 Copy the klipper.bin to the desktop, then rename it to firmware.bin

Important: If the file is not renamed, the bootloader will not be updated properly.

Ensure that all SKR boards are not powered, then remove the microSD card(s) that are installed.

Connect one of the microSD cards to the computer with the firmware.bin file. Open the microSD card in the file browser. There may be a file named ‘firmware.cur’; that file can be deleted or left alone. It does not matter because it will be overwritten later.

V2: Repeat the process with the second microSD card.

Replace the microSD card(s) into the SKR(s). If more than one, it does not matter which card goes into which controller.

Turn on the power supply to power on the SKR board(s). If named properly, the SKR will automatically update with the Klipper firmware.

Important: If the SKR(s) are not powered with 12-24V, Klipper will be unable to communicate with the TMC drivers via UART and the SKR will automatically shut down.

Back to Software Installation